In this article we’re going to review a couple of git best practices that will make you the dream contributor for any open-source project maintainer. Well, provided you can code as well of course!

So you’re going to contribute to an open-source project, huh?

Well, this is your new leitmotiv

(But first take a deep breath and relax)

For this tutorial, we’re going to use a repo that I’ve set up on our helyo GitHub. https://github.com/helyo-world/git-tutorial

Let’s say this repo is a big open-source project we’d like to contribute to. First of all, assuming you already have a GitHub account, log-in and fork the git-tutorial repo.

Back on your own GitHub profile, you should now see your own copy of the git-tutorial repo in the Repositories tab 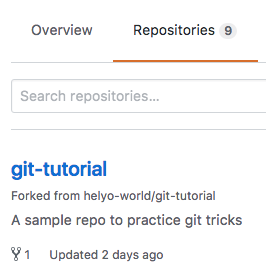 Now in your favorite shell, clone this repo

Note: use git clone git@github.com:ebarault/git-tutorial.git if you’re using SSH rather than HTTPS (which you should!), but let’s stay focused for now

Add a new remote pointing to the main repo

cd to the git-tutorial directory and execute the following command:

For now, our local git repo is configured with a single remote leading to your forked instance of the git-tutorial repo. We need to add another remote so we can easily fetch any modifications on the main repo. For this we use the git remote add upstream command.

You can see now that the repo is configured with a new remote leading to the main git-tutorial repo.

Note: I usually choose the name upstream to refer to the main repo, but feel free to customize this according to your own tastes and habits.

Create a feature branch and start the heavy lifting

Now we decide to start implementing some awesome new feature we’d like to ultimately backport to the main repo. The best practice for this in general is to create a feature branch in your own forked repo, work in that branch until you consider the work ready to be reviewed, and then create a pull request in the main repo. Let’s see how it’s done.

First let’s create a new branch for our new feature and check it out:

Note: it’s usually the best practice to prefix feature branches with feature/, it will help keep the work organized. But it’s important that you follow the rules put in place in the main repo. Look for such rules in the README.md file or ask one of the repo maintainers.

Now let’s implement our tremendous new feature, commit and push it to our forked repo. And by tremendous I mean things like editing a Readme file, yes, that kind of heaving lifting!

So with your favorite text editor, insert a few lines in the README.md file. In fact, to simulate a day-to-day workflow, we’re going to make several commits.

First I add the following line to the Readme.

Now I edit once again the Readme and fix my previous addition:

Now we push our work to our own repo. At first it won’t work because our feature branch has no remote yet.

If we were to create the pull request now, the people in charge of reviewing your code would not be able to test it against the latest modifications they have merged in the master branch.

First we need to fetch the changes on the main repo’s master and rebase our work on top of the changes committed while we were working on our awesome new feature.

So let’s review this:

Note: Although it’s not absolutely required to keep a carbon-copy of the main master in your forked repo, I find it more handy and less error-prone to always rebase against a forked master rather than the main one.

Ok, it looks like 2 new commits were added on the main repo’s master since we did the fork. Our local master branch is now in sync with the main master branch, let’s push the changes to our remote forked repo.

Note: The -f option is a shortcut for the force option. Now, you will find a lot of articles claiming that you should not force push, furthermore combined with rebasing, that you’d rewrite history, summon Godzilla, or cause all sorts of mayhem, but here it’s totally safe to do this as we just want to carbon-copy the main master in our own foked repo.

Good, the masters are in sync now! Let’s move on.

Rebase the feature branch against the master

Now we’re going to apply the latest changes committed on the master branch into our awesome feature branch.

Arf… some changes applied into the master branch on the Readme are now conflicting with the changes we committed on the Readme in our feature branch (In other words, git is not smart enough to merge the changes and requires us to do it). Let’s edit the README.md file to set things right.

Note: You will note that the Readme.md does not contain the content of our second commit, it misses the “Isn’t this a wonderful day?” addition. It’s because git has rewinded back our branch back to point where it is aligned with the master branch, and is now applying back our commits one by one. A conflict occured while applying the first of our two commits, hence the content of the README.md file at this stage.

All good, now save the file, git add it, and finish the rebase thanks to the --continue option:

Let’s force push the result of the rebasing to our repo.

Why force push, you ask? Well the rule of the game here is to have the commit trees of the main master and our feature branch in compatible states. So if we were to go through a classic pull > merge > push process, we’d pollute the commit tree with our merge commits. The trees would end in the same position but not using the same track. We just don’t want that so we force push, yes we rewrite history as if we’d been working with these two new commits from the main master from the beginning. This is what we do:

We are now ready to fire our pull request. Go back to your forked git-tutorial repo and go on with the shortcut proposed by GitHub:

Or create the pull request directly from the branch tab

There’s one very important thing here you should pay attention to, at least once: this little ticked option down the page, on the right, labelled “Allow edits from maintainers”. 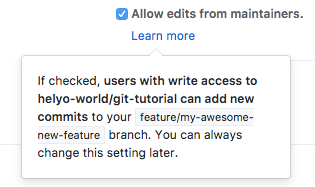 What this means is: by default, if you don’t uncheck this option, you are allowing the owners of the main repo to commit changes on the branch you have created a pull request from, in your own forked repo. This is meant to make the project maintainers’ lives easier when interacting with your code, aiming at pushing the final tweaks required before merging your branch.

You can find more information regarding this option at the following link.

Now you’re closing the discussion with the project’s maintainers, ending with more new commits, possibly more rebasing against the master branch, and at this stage keeping all those commits was good to ease the discussion and permit rollbacks or cherrypicks to particular commits (more on this in a further article).

As good maintainers, usually the project owners will ask you to:

This can easily be done using git’s interactive rebase feature. For this you’ll need the hash of the commit that was pushed just before your first feature commit.

Following this command, git opens your favorite text editor and shows something similar to this:

For now the rebase is set up to pick (use) your two commits. What we want is to meld the second into the first and change the title of the resulting commit. To achieve this, simply edit the first 2 lines as:

Note: you can use either fixup or squash. It is entirely up to you, depending on whether you want to keep some info from the melded commits in the resulting one.

Now save the file and quit. Git will now reopen the editor, this time to let you reword the commit message:

Now save and quit the editor, the rebasing process ends:

Ok, our former two interim commits are gone, replaced by our new commit description. Now we just have to force push the state of our branch to our forked repo. Again using force push since you deliberately want to rewrite history to make the commit tree cleaner now. Of course you can create a backup branch at any time before starting the rebasing process by doing nothing more than git branch backup/my-awesome-new-feature which would keep all your interim commits safe in there.

The new branch content is now pushed to your feature branch, which is instantly reflected in the pull request you’ve created on the main repo:

Now the project owners can safely merge your branch into the master branch, resulting in only two additional commits logged in the commit tree: the first one for your feature, the second for the merge.